“In the end we saw reason, Mr. Skinner said. “A lot of mistakes have been made along the way, not just by us but from them, from everybody. I think there’s going to be a good coming together.”

Mr. Skinner said he would now work with Mr. Ströbele to create a fair commercial property contract to give business tenants an automatic renewal. While residential property leases in Berlin are well protected by law, commercial leases remain vulnerable.

“It’s not a financial thing, it’s a moral thing… I would like to design a different kind of contract for commercial properties whereby they get an automatic renewal rather than something that just goes down to zero, and people like me can just say ‘no’,” Mr. Skinner said.

Cafe Filou co-owner Nadja Wagner confirmed that they had received a verbal agreement from Mr. Skinner that the contract would be renewed. While the details are yet to be finalized, Ms. Wagner said she expected the rent to remain unchanged, and the contract to be valid for several years with extension options.

“We’re pleased with the outcome,” Ms. Wanger said. “It is only because of the support of the neighbourhood that we have been able to come so far.”

Mr. Skinner praised the role played by Clare D’Orsay, the operator of Vertikal restaurant, which sits next door to Cafe Filou on Reichenberger Straße, and is also Mr. Skinner’s tenant.

“She was relentless in getting us to keep the Cafe Filou operators,” Mr Skinner said.

Clare D’Orsay spoke on the latest Radio Spaetkauf podcast about the violence and vandalism she had experienced from misguided protesters who had targeted her business due to its proximity to Cafe Filou.

Ms. D’Orsay said she had been spat at, pushed to the ground and had her windows smashed by an organized group for being a foreigner opening a nice looking restaurant in Kreuzberg.

The 32-year old New Yorker moved to Berlin seven years ago and has run other businesses in the neighbourhood. She pointed out that Restaurant Vertikal did not displace any existing business, as the building was recently constructed on an empty corner lot.

Ms. Wagner from Cafe Filou said she hoped the attacks against Vertikal would cease, and that the restaurant would be integrated into the community.

Listen to the full Radio Spaetkauf podcast to hear more: 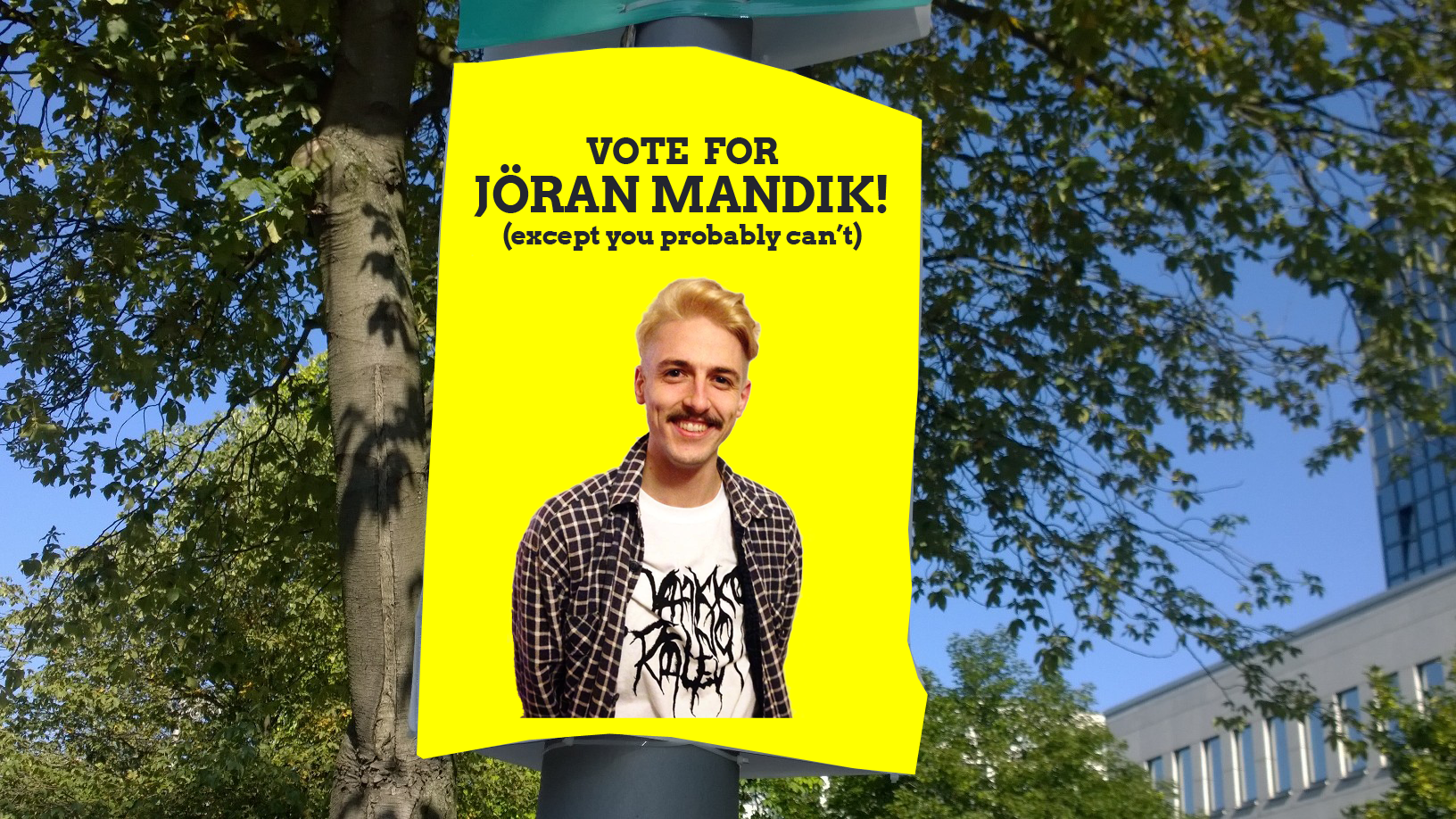 Berliners will go to the polls to vote for their local councils and the city-state government on Sunday September 18 2016. Who should you vote for – if you can vote? Radio Spaetkauf decodes the parties and their programmes for you:

If you’re a European Union citizen and have registered your address with the Bürgeramt, you are eligible to vote – but only at the very local level, which is called the Bezirks-Verordneten-Versammlung, or BVV or short. You should have received a letter in the mail informing you of your polling station. If you didn’t get a letter, you aren’t registered and can’t vote.

You get one vote, and you can give it to one party. Each party has lists of candidates who are given seats depending on what percentage of votes they win. There are no independents in the BVV system. These local councils decide on street-level issues. Most importantly, they can decide whether to declare an area as a “Milieuschütgebeit”, which creates extra restrictions over housing policy – which is good for renters.

Not sure who to vote for? If you’re worried about your rent going up, check if the party supports more Milieuschützgebeit and rent controls. This is the most effective thing you can do with your local vote.

WHO IS PROMISING WHAT?

Here’s a run-down on the main parties and what they stand for, in order of how they’re currently polling:

SPD
Latest poll: 22% (down from 28%).
Leader: Michael Müller.
About: In power in Berlin for the past 27 years, as major coalition partner for the past 15. Oversaw (or overlooked) the BER disaster.
For: More investment in education, free lunches at schools, and free kindergartens.
Against: Spaetkaufs opening on Sundays, legal cannabis.

CDU
Leader: Frank Henkel.
Latest poll: 18% (down from 23% at last election).
About: Have been in coalition with the SPD since 2011. Got tough on protesters, squatters and drug dealers.
For: More police, more video cameras, using police in evictions.
Against: Gay marriage, burquas, streets named after Karl Marx.

BÜNDIS 90 / DIE GRÜNEN (THE GREENS)
Latest poll: 18% (17.6% at last election).
Leaders: Ramona Pop and Antje Kapek.
About: The only party to fully back the goals of the Volksentscheid Fahrrad (bicycle referendum).
For: Spaetkaufs open on Sundays, legalizing cannabis and same-sex marriage, body-cams on police.
Against: The A100 highway through Treptow/Friedrichshain.

FDP
Latest poll: 5% (1.8% at last election).
Leaders: Sebastian Czaja.
About: Trying to make a come-back after being destroyed at the last election.
For: Keeping Tegel airport open, building the A100 highway, English as a second bureaucratic language.
Against: The AirBnB crackdown, most regulation and taxes, investment in social housing.

DIE PIRATEN
Latest poll: Less than 3% (8.9% at last election).
Leaders: Bruno Kramm.
About: Were very effective in asking lots of questions in parliament and documenting the BER disaster.
For: Free public internet across Berlin, pilot project for unconditional basic income, free public transport.
Against: The A100 highway, video surveillance, the BER airport company.

STILL NOT SURE WHO TO VOTE FOR?

SO WHO IS GOING TO WIN?

The most likely outcome is a coalition between the SPD, Die Linke and Die Grünen. The CDU wants to stay in power in coalition with the SPD, but Michael Müller has said he’d prefer to share power with the Greens. At the last election, a potential SPD/Greens coalition failed to materialise because of disputes over the A100 highway. Those still exist, but the parties seem willing to work through it this time around. But the polls are close, and almost 30% of voters have told pollsters they are undecided. It’s still anyone’s game.

Listen to the latest episode of Radio Spaetkauf for a full analysis of the election and possible outcomes, with some graphic design critique thrown in:

A team of Syrian refugees in Berlin is building an app to help solve the problem of German paperwork. And it’s not just for refugees – all new arrivals in Germany will benefit from the app, which they’ve called Bureacrazy.

The app will allow a user to enter data in their own language, and prints out forms in German. It also gives tips on required documents and office locations.

It’s amazing no one thought to solve this common problem before. Even more amazing is that the Bureaucrazy team had no software development background before they arrived in Germany.

The app’s creators are Ghaith Zamrik, Munzer Khatt ab, Omar Alshafai and Salim Mohammad, all from Syria. They have arrived in Berlin over the past year after fleeing the war in Syria, and have been living in camps in sports halls and hotels across the city.

As they told Radio Spaetkauf recently:

“We started learning coding here in Berlin with the REDI School of Digital Integration. The best way to learn code is to start building an application,” Ghaith said.

In order to launch Bureaucrazy by January 1, the team now needs more support from professional coders and financial backers. You can contact them through their Facebook page.

Listen to their interview on Radio Spaetkauf here.